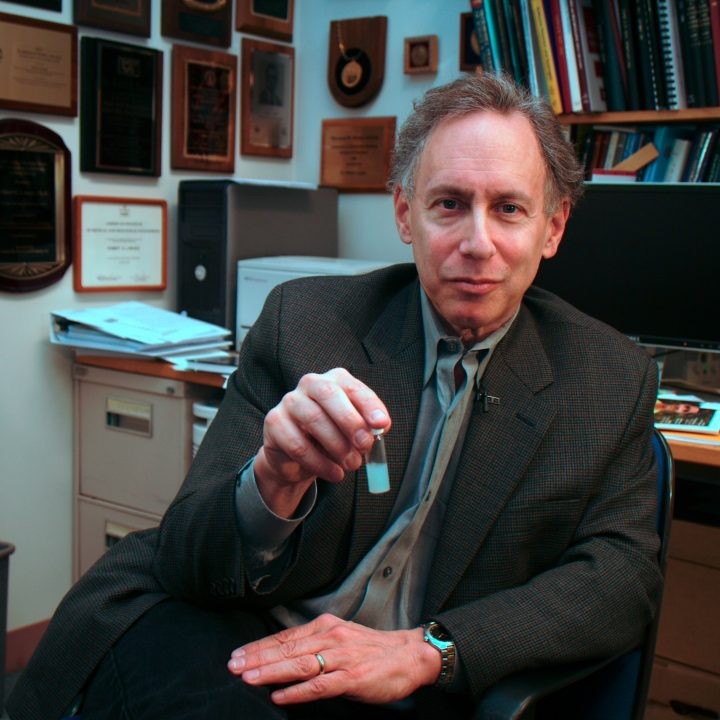 To do that, Langer had to identify such substances and also conduct a bioassay that would test the effects of these substances in the body by putting a material containing the substance into the body right next to a tumor. It had to last for at least a month, if not longer, and not cause any harm to the body.

“The only way I could think to do this was to create a polymer that would slowly release the different molecules I was isolating. And we were fortunate, after quite a long period of work, to develop a whole series of slow release polymers that could release medications to the body over time.”

In fact polymers were used to encase drug molecules even before Langer’s work, but the problem was the size of the new drug molecules: they were simply too big to go through the small holes in polymers and there was nothing one could do about it, Langer was advised.

The properties of polymers can be also modified by external stimuli such as ultrasound, electric pulses or magnetic fields to change the release rate of the drug. This has led to the development of increasingly sophisticated release systems and, when combined with electronics on the micro chip, the release rate can be programmed in advance so that the chip delivers a carefully-measured dose of the medicine precisely when it’s needed. Langer’s team has also developed an implantable chip that can also monitor a patient’s blood chemistry and deliver medication accordingly.

The polymer research led to the design of new kind of biomaterials that can be used as tissues. For example, emerging technologies enable the artificial production of skin, cartilage, liver or other cells. The idea behind tissue engineering is to make a temporary structure for the cells that can grow around and in within the polymer material. When the natural tissue is strong enough, the artificial “scaffold” dissolves.

Artificial skin is already in clinical trials and growing liver or pancreas organs from the patient’s own cells in may soon be a reality. Articifial tissues may soon help nerves to regenerate and thus help people who are paralyzed, too.

Dr. Langer’s research laboratory at MIT is the largest biomedical engineering lab in the world. And while the man himself can still be seen in the lab, now he is mainly guiding his more than 100 researchers.

“I mainly spend time thinking and trying to find the best directions for the research. I like also teaching, which I find very rewarding and stimulating, so I teach almost daily. Research is a long term undertaking, but teaching is very immediate – you can see right away that your students are learning.”

Dr. Langer has co-founded several small companies that have commercialized his ideas. The first, Enzytech, specialized in drug delivery and the use of enzyme and protein-based technologies in food additives.

Other notable companies are Mimeon, a company that focused on glycomics, the study of carbohydrates used for drug discovery, and MicroChips, a startup that is commercializing microchip drug delivery technology. Many of Langer’s patented inventions have been licensed and are being used globally.